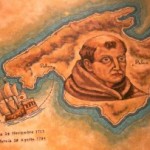 The writings that Beth Ingels produced during the Depression were greatly influenced by the progressive scene in which she and Peggy Carol were immersed. Her novel “Cannery Row” was completed around 1936 or 37 and reflects a liberal sympathy for the underpaid cannery workers. In Benton’s biography of Steinbeck, John’s friend Jack Calvin is described. Calvin met John at Stanford in the Twenties, and during the Depression he and his family lived near Ed Ricketts and his wife Anna. Ricketts and Calvin collaborated on the classic text of marine biology “Between Pacific Tides” and were important influences on the young Steinbeck. Ricketts was also a good friend of Beth and Peggy.

Benson writes that Jack “Calvin’s hostility was expressed in his conviction that Steinbeck had stolen Beth Ingels’ stories. Steinbeck would come back from Carmel fuming.” In comparing Steinbeck’s best selling book with Beth’s earlier story, one immediately recognizes that the conversational tones of each share similiar sympathies for the hard working packers. Instead of using “Doc” Ricketts as the central character, Beth introduces Judith Thompson, a narrator who could have been any number of women Beth had known since Monterey High. 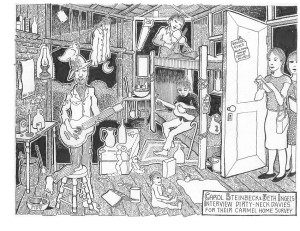 Beth’s story is played out against the socio-economic background of Cannery Row during the Depression, and focused on the struggle to introduce organized labor in that industry. Judy plans to marry Jack as soon as they can afford it, describing how her fiance “gets mad over what he calls injustice to the workers. Jack listens to a labor organizer from San Francisco named Mr. Bates, and shares his conviction that the workers at the Blue Sea Canning Corporation where he and Judith are employed should have more of a say in their working conditions and salary.

Blue Sea is managed by a Sicilian named Nuni Estali, “a miniature Mussolini” whose uncle owns most of the stock of the Cannery. Some of Monterey’s Sicilian community is clearly depicted as having stronger ties to Fascist Italy than to America. Jack and Judith’s old friend Ito, however, clearly has patriotic and loyal allegiance to the U.S., even those he is discriminated against for his Japanese Heritage. In that era many deeds on the Monterey Peninsula contained restrictions banning “Asiatics, Negros, ” and Jews from purchasing homes.

Jack and Judith’s friends are Ramon and Maria, an Hispanic married couple that live in a tiny house on the hill, presumably Tortilla Flats. When these heros even begin to consider organizing a union they are brutally attacked by thugs that have been hired by Nuni. Nuni is an associate of stockholder Mr. Williams who gave “talks on Americanism at the Legion meetings” and who is opposed to Mr. Bates and other “outside interests,” introducing a company sponsored scheme that pretends to benefit employees but actually deprives them of their rights to organize.

The American Legion Post in Monterey and Carmel had been supporting the police force and sheriff’s department in attacking and striking farm workers nearby. In the Twenties their National Commander, Alvin Owsley, warned of the “Red Menace” behind organized labor and boldly declared “Do not forget that the Fascisti are to Italy what the American Legion is to the U.S. These paramilitary Legionaires liked dressing up in their starched uniforms and breaking up meetings of the labor leftists. Beth felt that their racist and sexist remarks were a reactionary threat in her community, and felt the Legionaires were connected to big growers. and real estate development companies and cannery management.

{ The above paragraphs were the beginning of a synopsis of Beth’s novel, followed by a large portion of the manuscript illustrated by Steinbeck friend, Bruce Arriss who had been close to Beth and Carol. In a 1992 edition of Carmel’s newspaper “Freedom Of Speech”. An anthology of articles from the paper’s first year is available on Amazon, with art work by Carmel’s Bill Bates and John Thompson.}