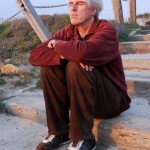 In 1992 the third issue of Carmel’s paper “Freedom Of Speech”, as part of the town’s 75th anniversary published an article about a 1936 WPA Local History Project that interviewed people who claimed to have ancestors who were Esselen or Coastanoan. This effort had an office south of Ocean Avenue on Dolores, midblock on the west side of the street, where City Hall was located and the Post Office was beside it; buildings still there today. The article remarked that “Carmel author Jimmy Hopper was head of the California WPA Writer’s Project, and appointed tree-hugger Dr. Ferdinand Hassis as the head of the Carmel office. In 1936 Hassis and his staff of mostly underfed women, including eccentric Yvonne Navas Rey, furiously chronicled local history.”

Dr. Hassis and his writing partner Dr T.M. McDougal, both with homes in Carmel, were leading science writers on the health of trees and measurements of their growth. They were especially interested in how Esselen families revered trees with the greatest “medicine” (power). These natives never harmed living trees, using only dead branches for fuel and light. In De Angulo’s writings he noted the native word for “people” included animals and certain trees, who were known to be conscious and had complex behavior.

Hassis and McDougal shared “Why Trees Behave As Human Beings” by Herbert Cerwin. For this, and other reasons, the editor of the paper “The Carmelite” back then proudly hailed Carmel as “a town of tree huggers,” and that reputation began thousands of years ago with the Esselen.

In 1936 the 28 year old Cerwin published a book on recipes, and studied the food trees offered. Hassis studied how Esselen used careful procedures to refine acorns, and young pine needles from specific trees, as they were seen as gifts from a living earth. Cerwin was also a scholar of Spanish Imperialism in Mexico and California, publishing a 1963 book on Bernal, an early Spanish historian.

As part of Hassis’ WPA Project various writers interviewed men and women who claimed to be part Esselen, and included them in “Tales Of Monterey Indians”. When WPA officials saw what Hassis had submited, they felt portions might be highly controversial and suppressed some of it. In 1936 Jaime DeAngulo of Carmel was widely seen in Carmel as an “authority” on the religion of native tribes and their foods and love of the trees. He had noted three ways local natives disposed of human remains: Burial, cremation and internment inside trees. There are indications he wrote about native thoughts on “tree language.” Yet all of his contributions seem missing from the WPA Report, and even today numbered pages are missing from the archive that his daughter willed to the UCSC Archieves.

Among surviving parts of the Tales are suspicious notes allegedly from Paul Mathews, born in Monterey circa 1880, that give no verifiable accurate details on Esselen culture. His fake description of “Indian Devil Worship” appear crudely confabulated. The 1992 article also summarizes contributions from “Indian laborer Jose Garcia who is described as “far to the left” in his role as a past leader of the Mexican Youth Movement. The fog spirits in his tale remind some of the stories told by Carlos Castenada, a best selling author in the 1970s.”

In a section “The Role Of The Mission church the 1992 article states “This anonymous Monterey born Indian and laborer is said to lack teeth and “looks Chinese.” He tells of the insitutionalized povery of the padres and their Indian servants, both subsisting on little food.Enduring flea infestation in appalling squalor, they were forbidden to own personal property.” Esselen historians have noted that tribal people residing here were blessed with abundant food in the estuary just a few minutes walk down from from the mission, a source of nutrition for thousands of years; and that native families frequently changed camping sites if fleas were a problem, never “enduring” the flea bites of their children and family loved ones.

In “The Banners” an alleged source called ” Paul Mathews describes how priest waved banners of heaven and hell in front of Indian eyes. If they obeyed the bidding of the padres, they would ascend to the pearly gates. If they resisted or escaped the Mission, they would descend in a pit of fire forever.” Despite his two Christian names, the source does not mention that neither Jesus nor St. Francis nor Serra ever mentioned hell. The rare times Jesus spoke of “haydes” it was only meant as a destination for all departed souls, never as a place of eternal fire. John’s Gospel begins with mention of Jesus purpose that “we are all children of God’ and can ask forgiveness for our “sins” and shortcomings in the “Lord’s Prayer.” Serra and Franciscans took “Holy Orders” to teach what Jesus said, love and forgiveness. They could never threaten others with fear of some mythical “hell” that never existed.

In “First Crop At Carmel” “Martin was born near Carmel, and is described as a gifted storyteller” active in the Mexican trade union movement. Recording that his grandfater’s generation did not like the look or taste of the strange looking plants the Spaniards introduced, Martin recalls the first crop was a failure. Puzzled as to why the Spaniards were stealing water from the Carmel River god, the Indians blamed a Spanish devil for their suffering and lack of food.”{

Once again the fertile estuary, a few minutes from the Mission, nearest to the river and where the Spanish crops were planted, had abundant wild life. Rabbits, crows, skunks, mice. moles, possum, and deer could have eaten the crops, or could easily be eaten by any hungry Indians or Franciscans. Natives had no concept of theft of water from those thirsty animals or themselves or from crops. They had no concept of the way “god” was used here, just that all “people/spirits” were blessed by what the river provided, including crawfish, eels, crabs and various fish.

Even if men in Martin’s family didnt become fathers till age 30, then his father became a parent at 30 in 1906, and his grandfather became one at 30 in1876 .Having the “grandfather” being born in 1842, many decades after the so called “First Crop,” indicates his grandpa was a baby in the 1840s after the Franciscans left the Mission.

In the story The Sun Is A Fine Sun “Poet story teller Manuel Quinchilla lived in Monterey and the Santa Lucia Mountains between 1876 and 1939, claiming his grandfather labored in the Mission Fields. He said “work is bad” and “woman is unhappy”, work is like poison”, and refers to the old gods and Father Juan. These four chapters are followed by reminiscences titled “Father Juan” and “Father Antonio”. Fernando del Rio’s “Frankness” is told by an Indian from the Santa Lucia Mountains who the WPA calls “an old man with a Mongolian face” born in 1875.”
Show message history

None of these sources likely had a grandfather born when Serra was at the Mission. There has been no indication from Esselen people that gathering food on the Monterey Coast, to enjoy sharing with their family and friends, was “work”. Receiving gifts from the earth and preparing them were a grateful act of delight for Esselen parents and children. These sources give no details on just what foods were taken from the estuary, along the river, or in Carmel Bay; no accurate details on what Franciscans like Serra taught about the sayings of Jesus or St. Francis in their many missions in various countries.

“The Aleut” in the 1992 summary of the WPA “Indian History” describes “Carlos Lemma a 75 year old storyteller with “bulging eyes and belligerent manner. As a veteran of Mexican outlaw gangs, the Indians hates all Americans. His tale focus on an Aleut slave who had escaped from a whaling ship in Monterey Bay. He is enraged at the town for not helping and feeding him and steals to survive. At first the first passive Indians are amused and appreciate his rage, then later they too refuse to help him. Considered a demonic threat, he is finally shot.’

This story is Not part of any local Indian group, but is placed in the chapter on them. Like the other sources named here, he is never described as a “full blooded Indian,” or anyone with a public school education or ties to any church and community. The alleged Aluet gives no anthropological information, nor do we know the year of his death or if he was shot in self defense or was insane

Some actual WPA contributors with advanced writing skills like Yvonne Navas Rey, Hoffman, or perhaps De Angulo, are missing from the project. While working on the Project Navas Rey was stalked by Carmel’s Police Chief Norton who kept a secret notebook in his pocket of progressives that he spied on . These notes were shown to members of the American Legion where he was popular and to wealthy conservatives nearby who secretly paid him. The assistant Chief Earl Wermouth verified this in a secret City Hall meeting in 1939, after which Norton resigned. He had spied in 1936 on the attractive widow Navas Rey, seeing her through a bedroom window engaged in oral sex, then arresting her, testifying against her, and listening to the judge sentence her to life in prison, where she died in Tehachapi Prison after being separated from her young son. The man she was with was never tried or charged, and French born Yvonne did not know what she did was illegal. After the arrest all of Navas Rey’s writings on the WPA Indian History and local lore were destroyed, and replaced much later with bogus tales entered in late 1939 and 1940. Stories by Hassis and her fellow writer Hoffman on Indian History about Carmel’s Tribal heritage also vanished.

One Response to “ESSELENE 1936 HISTORY PROJECT”

Stealing water?
Fabricating facts?
Life in prison for a little head?
How times have changed. Monica was so lucky!