John Thompson was born in Carmel in 1945 and at 17 attended MPC nearby when Baez was a fellow student and Dylan lived here. His posters and work in the school paper and magazine were part of that emerging counterculture. Entering the University of California in 1965 to study art history, his work in student publications appeared, including the UCB humor magazine “Pelican” and UCB Extension posters and brochures. 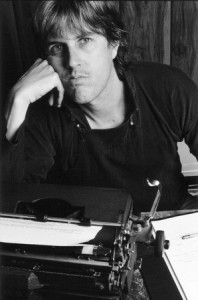 After graduating with a BA in Art History in 1967 his work began to appear frequently in the first Bay Area “Underground Papers’, including his covers and cartoons in the Berkeley Barb, San Francisco Oracle, San Francisco Express Times and Haight Ashbury Express. In the Oxford University Press History Of Berkeley In The Sixties, he and a friend are mentioned as the two most prominent graphic artists of that tumultuous era. In “History Of The Haight Ashbury” from 1980 he is named among the original poster designers and psychedelic artists, and his posters are in “The Art Of Rock” by Paul Gruskin, Artabras 1987; “The Concise History Of Posters: 1870-1970″ by Abrams in 1972 (with the entire back dust cover his famed 1967 “Flower Child” poster.

Rolling Stone Press in 1973′s “A History Of Underground Comics” by Mark Estren contains his work, including the comment “John Thompson is the best known and most prolific producer” of mystical underground comix and posters; inclusion in “The History Of Comic Books In America.” Thompson’s art and writing was widely seen in a hundred papers in the ” Underground Press Syndicate”. Examples can be seen by google searching “John Thompson Psychedelic.”
Continuing his work as an art and literary historian, a 38 part series on the legacy of local culture appeared in Coast Weekly 1989-1990. Then in the Nineties he was associate editor of a Carmel paper where two hundred of his feature articles appeared (and some in the Monterey Herald, etc) Anthologies of these writings appear in “Secret History Of Carmel” and two other collections. His wife judyhurley.com, a painter and writer live in Carmel, near John’s son and daughter Quinn & Elana, and her son Joey, who are all gifted musicians.
After a MA in Art Technology in 1970, and extensive post graduate studies later in sacred art & literature (Naropa Institute), education and counseling (Chapman College), Thompson worked at Hartnell College in the Seventies, then at Monterey Penninsula College 1980-1990 (Film Production and Screenwriting)

Thank you for your interest in our major contributor John Thompson.

Additionally, some of his publications can be purchased directly from the following links:

Best of Freedom Of Speech: http://www.amazon.com/Best-Freedom-Speech-Constance-Dudley-ebook/dp/B00BUVIATG