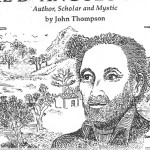 Justin Dart (1907-1984) was very pleased when S.F.B. Morse first showed him , and his attractive wife Jane, one of Pebble Beach’s prime pieces of real estate. Dart wanted “only the best,” a spacious home overlooking the brilliant green golf links, with the picturesque Pacific Ocean close enough to hear on moonlit nights. To impress his friends with his wealth and status, Dart wanted a  high ceilinged home   with 2752 square feet for his art collection, and  a panoramic view that would reflect how he viewed himself, and how others should see him.       Dart’s wife, who he called “Punky,” was the actress Jane O’Brian. Having a spacious uncluttered home on the 17 Mile Drive & Viscaino , and a beautiful wife, helped him achieve  favorable status for others to see.Those that knew the couple were impressed with their confident image and enthusiastic energy about politics. Dart wanted important people to have a positive first impression of his success and friendliness, giving them the idea he was a “take-control-kind-of-guy.”      Morse shared these traits with Dart and his other conservative friends, including Reagan, Nixon and Grunsky. They knew that such an impression was key to gaining people’s trust, and persuading them that their political views were highly reliable.      The New York Times  quoted Dart “What America so sadly lacks, he said, are more patriots like myself.” He has a home  in Pebble Beach right on the waterfront,” where he entertained Morse, General McClure and a group  of patriots that was later called “Reagan’s Kitchen Cabinet.” While convincing listeners of his patriotism Dart wanted to sound since, not boastful. The Times further  described him as a “Kingmaker,” who “presides over one of the nation’s largest political action committees,’ who from 1953 was one of the Republican Party’s “most aggressive fundraisers.” In his immaculate home he held “late night political pow wows” where his handpicked Pebble Beach group, and members of his “Kitchen Cabinet” drank fine wine and  planned to get rid of Brown, Farr, Rumford, and The Rumford Fair Housing Act.” 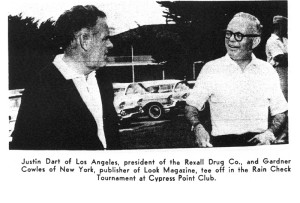 FATHER AND SON BOTH EARN THE MEDAL OF FREEDOM     In 1959 at college Dart’s  14 year old son contracted polio, and was in a wheel chair till he died in 2002. In college he started a civil rights group, followed the teachings of Gandhi on civil disobedience and NEVER opposed employmemt or housing opportunities for ANY minorities. He was strongly in favor of Rumfort’s “Fair Employment Act”, which he hailed at 14. and the “Rumford “Fair Housing Act.” Both of these led to the end of prejudice against “Asiatics, Negros” and Jews in Pebble Beach.     Dart’s precocious son later went to Japan to found Tupperware there, and married a Japanese woman, greatly irritating his father who called the marriage “inter-racial”, a word he used as an insult. Back in America the son and his wife became the most famous leaders of the movement to end discrimination against the handicapped, extending the Civil Rights Movement of the Sixties to those with physical and developmental problems. Putting together strident demonstrations and writing strongly worded press releases, he went on speaking tours to promote this cause, and was joined by countless like-minded others.     When Reagan was in the White House he awarded his friend Justin Dart Senior the MEDAL OF FREEDOM. When Clinton lived there he and his wife Hilary gave the MEDAL OF FREEDOM to Justin Dart Junior, hailing him as “The Martin Luther King for disabled people.” Dart’s mother had always been proud of her son’s achievements, and that day in the Clinton White House brought tears of joy to her eyes. She was aware that her son recalled his father as an alcoholic bully, nd the father’s former wives said their young husband was a self righteous sexist. 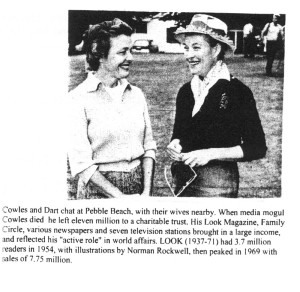 The  property for the Monterey Art Museum and its La Miranda extension in Iris Canyon (just west of MPC), was once acquired by Morse from David Jacks and held by Morse and Del Monte Properties. So when Dart senior died in 1983, leaving a fortune and a collection of art, a four and a half million dollar extension of galleries was added to La Mirada. Designed by famed architect Charles Moore, who planned the Beverely Hills Civic Center, The Justin and Jane Dart Wing opened with a gala celebration in honor of its benefactor on May 27, 1993. Dart’s Pebble Beach friend (former CIA Chief) contributed a half million dollars for that building memorializing Dart.        Part of our  dramatic local history, the legacy of the Dart Family encapsulates how the Sixties here triggered forces within many families, especially in relations between fathers and sons. What happened here on the Monterey Penninsula effected changes in America throughout that tumultuous era. helping shape how the country is today.

An interesting and insightful look at life in Carmel. Johns writing is always something out of the norm and an adventure to read.

Thanks again John for bringing to the fore that I am – and I would venture others are -tragically either uninformed or misinformed regarding some fairly relevant aspects of our local, American and world history.
The Uber rich seem to like it that way.

Again, Mr. John Thompson enlightens the readers on this website with little-known information about the rich and powerful of the Monterey Peninsula area and through their national connections, a force in shaping US domestic and foreign policies and their very subtle way of manipulating American opinion using the Dale Carnegie method (which I seriously doubt Mr. Carnegie would have endorsed) of being the “nice, humble, folksy guy” which made Ronald Reagan so popular with non-discerning, and non-critical-thinking people who obviously applauded his mandate by electing him twice.

Through in the marketing techniques of the master propagandists, Edward Bernays, and follow the dots from the era Mr. Thompson starts with and leading up to the present era, and see how successful the PsyOps program has been in molding public opinion on local, national and international issues.

Not that Dart, Reagan, et al were successful in stopping all progressive movements, but their deeds were implemented and to this day are still cherished (but not always outright) by a large portion of the American people.

Thanks for this fascinating story which went on literally in our own back yard.